In 1944, as the Second World War raged and brutalised the world, Aldo Leopold asked himself the question of the « ethics of the Earth ». Faced with broken humanism and devastated living environments, this American forest engineer urges us to take a mountain point of view to shift internally and give us the means to change the world. What if our existences were mixed with those of other living beings and moving entities, and if together they formed a network tending towards a common future? What if humans, animals, mountains, forests, rivers, glaciers, and grasslands shared more than just a utilitarian relationship, and if they coexisted beyond or below narrow forms of cost calculations – interests that we, humans from industrial modernity, have assigned to them? These are the questions which animated the forerunner of ecological thought more than half a century ago; these are the questions we wish to ask today.

Our story is about a glacier. A glacier overlooking a deep valley in the Hautes-Alpes, at the foot of La Meije in the canton of La Grave. A glacier on which an operating company has decided to build a third section of the cable car, reaching a peak of 3,600 meters, thus becoming the worthy competitor of the Aiguille du Midi in Chamonix. This infrastructure with the aim of providing summer skiing is totally obsolete in the age of climate change! In the future it would also open up the possibility of creating yet another super ski area, eventually linking the resorts of Alpe d’Huez, Deux Alpes and La Grave.

The latter stands out precisely because it is anything but a classic ski resort, but an off-piste ski area favouring the autonomy of practitioners engaged in a still wild environment, on the edge of the Ecrins National Park. Faced with this dantesque project, the millions of euros of investment and the lack of community public consultation, a citizen collective has been formed. It proposes to make the choice not to build a third section and to remove all the obsolete infrastructures already existing on the glacier in order to reinvent new forms of relations with this weakened living environment.

These forms must be able to combine mountain skiing and mountaineering practices, scientific understanding of the glacier and education in ecological and climatic issues for Europe’s sensitive alpine mountain environments. Furthermore, we must think from the foot of the glacier, and ask ourselves how to enable the coexistence of the practices and trades that exist here, from pastoralism to mountain agriculture, from crafts to education, from businesses to sciences; in a dialogue that produces alternative responses to mechanised “mass tourism”.

The question posed today by the collective about this small piece of French altitude and the developments planned for it goes beyond the stakes of a simple locality: after two successive confinements, when we have had to embrace whole new levels of uncertainty that affect all areas of our lives, what is the right way to connect with the mountain and the glacier? Should we continue to to climb, faster, higher, stronger , to seek out the “resource” that has dominated our valleys for millennia for the next few decades of its survival in this state? Or, is it not time to take it down a notch, to collectively ask the question of what a dying glacier is?  And to ask how its announced death resonates with the way in which our extractionist modernity is decomposing visibly in the face of a virus that shatters any notion of security in a few months? In Iceland, glaciologist Oddur Sigurdsson told the scientific community in 2014 that the Okjökull glacier should be decommissioned because it had turned into « dead ice » due to global warming; the terminology « dead ice » should alert us.

Humanity in search of meaning

We in the West are used to thinking of glaciers as inanimate elements that are part of our « natural environment », rather than as full players in a world we inhabit together. Perhaps it is this idea that we must start to deconstruct in order to weave the threads of another possible story.

A detour through the indigenous collectives who have connected with mountains and glaciers on a daily basis for thousands of years can help us reformulate the problem. For these collectives, there is no contradiction between the notion of considering them as living entities with which humans have certain « duties of dialogue », and the need to move there, and/or to use the stored fresh water they lavish on those who live nearby.

The Qeros of the Peruvian Andes send them rituals to ensure the balance of the seasons and the climate; the Athapaskans of the Yukon and Alaska see them as entities who listen to what humans say and respond to their actions in their own way; the Even of Kamchatka think of them as the place of transit for the souls of the dead and the unborn; the ice cap of the great American and Canadian North is named « the place where all life begins » in many native languages, despite the misleading impression of « emptiness » that grabs the outside viewer as they gaze at the pack ice. In New Zealand, the Maoris, custodians of the same type of relationship to the world, even succeeded in transforming the legal status of Mount Taranaki in 2017 to be officially declared a “subject of law” and a few months later the Whanganui River also received this status. Thanks to the battles of their spokespersons, who call themselves the Taranaki Iwi in reference to this volcano that they consider to be their ancestor, these living environments finally escape the grip of certain humans who appropriate for themselves exclusive extraction and operating rights.

What about us here? Is it so difficult to change focus of our way of relating to mountains? To see them as anything other than mere playgrounds of ecstasy developed for an exhausted humanity in need of sense and meaning? Wouldn’t the practices that could be deployed in our mountain be infinitely more varied if we decided to pluralise the single landscape and recreational setting, establishing the idea of a sovereign mountain foreign to the tribulations of the beings who roam it? Is it so difficult to retrace our steps, and to transform behaviours inherited from the industrial revolution, the very one that makes us believe so strongly and unquestioningly, that there is a nature outside of us which we, as modern homo economicus, should exploit until no more of this great outside resists our imperatives of profit and profitable management?

Giving voice to the inhabitants

Do you feel a sadness born in you, when it is explained to you that the economy of the mountain valleys depends only on the concrete and mechanised tourist development, and on the exploitation of the natural « resources » which humans “own” for a few slim years? If so, then you too, wherever you are, are doubting, wondering what we have done with this world that has supported our existence. Is it possible that in coming out of the health crisis, business as usual takes precedence over the realisations that have awoken in us while we were shut up within the four walls of our houses? Are we once again going to convey to our living environments our inability to reinvent ourselves to face what is to come? Is this our collective response to the emergence of widespread uncertainty in our lives?

Within the La Grave collective, we think that many of us want to change the world; many who would like to see communities take new measures to decide to experiment with other forms of relationship with the entities that inhabit our environments. « We are all fighting for security, prosperity, comfort, longevity and boredom » writes Leopold to close his chapter. Isn’t it time to fight today for an ecosystem in which the big corporations that rule it no longer have the last word? To give a voice back to the inhabitants and their forms of life, who by their actions try to vary the dominant thought?

We are all actors in our worlds, humans with their different activities, animals with their specific behaviours, mountains, rivers and glaciers with their unstable and moving masses. To oppose development projects that no longer make sense means first and foremost to recognise this plurality of actors acting at various scales, whose relationships must once again become decisive.

At the Collectif La Grave Autrement, we are not saying that we know what it is to think like a glacier. We are not sure, we doubt, we ask ourselves questions. We want to try. To take a step towards it – that is not pylons and cables, but a step on the scale of our bodies, a small human step roped up on a giant river of ice whose abyss fascinates and terrifies us at the same time.

We decide to stop chasing its remains and pay tribute to what it has inspired in us. We decide to take care of it, to walk with it towards its last days because this may be our last opportunity to understand what it is made of and what it does to us. Faced with the field of ruins caused by the excessive saving of our lives, we believe that it is possible to reweave the threads of another story, which is told with all the existing ones of a particular living environment, however different they are, animate and inanimate, innervated and frozen, but all actors of the same world.

To all of you, we invite you to associate your name with this call. Scientists, renowned athletes, politicians, let’s say together that in this small piece of land that is La Grave, another development model is possible. Let us ask the cable car concession company and the municipality of La Grave to abandon the third section project and to launch with the Collective, all the inhabitants, and all those interested, the study of another project that respects and highlights the Girose glacier. 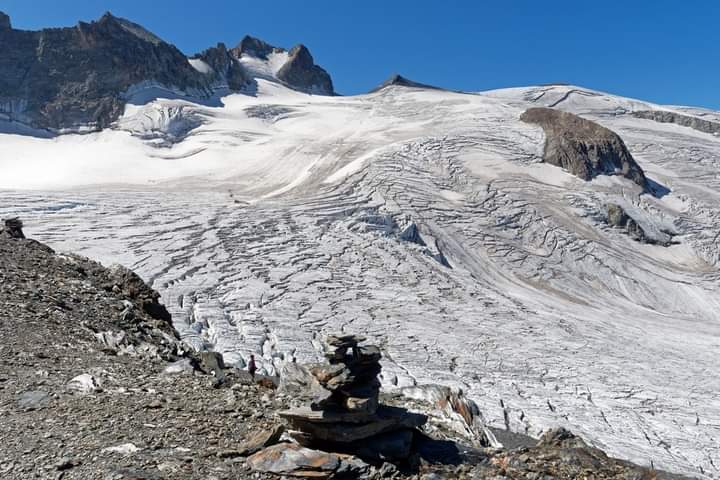