All this while the social and mainstream information/communication system, for the entire period, is busy spreading statistical data on infected, dead and swabs, as well as information on the possible trend and danger of the virus, which contribute to creating a lot of uncertainty and fear, so as to annihilate any consistent awareness among people.

Democracy is dying and the only cure it receives is called neoliberalism.

A neoliberalism that is stronger than before, which instead of being the main defendant in the ongoing social and economic crisis, sets the line for national governments and European institutions.

AFTER 9 YEARS THAT FEEL LIKE 9 CENTURIES, the Water Europe (WE) paper relaunches an overall political-economic project, starting from water.

WE is an association that involves more than 200 members, including suppliers and managers of water services that dictate the line (Veolia, Suez, Acciona, Canal de Isabel II, AEAS, Severn Trent, Utilitalia, Coca Cola and others) and representatives of the company civil, public and university authorities that support. This association has published a paper called "The value of water: towards a future-proof model for European Water-Smart Society", where the word value is obviously not referring to water itself, as it is a priceless asset essential to life that needs to be preserved for the future generations, but it is rather referring to the economic value of this good.

In the water field, investments equal to 1.5% of global GDP are planned (the OCSE points out that by 2030 approximately € 253 billion will be needed in investments in the water sector of Europe alone) and for each euro invested it is estimated a return of about € 4.

So big financial resources to invest and big profits to make!

The permanent acquisition of water as a source of profit not only defines the economic value and profitability of water, but it also makes water the foundation of an overall political project, the "water footprint" which with a false attention to environmental sustainability wants to control the consumption of water in its various forms (civic or productive use) and to control the reservoirs. All the above is in order not to compromise the return in terms of profits, expanding the sphere of profitability of investments in the water sector.

The project also includes "Digital water", the digitalization of service management that aims to simplify financial and commercial transactions and, last but not least, to produce of large quantities of user data (big data) useful for governance systems and innovative decision-making processes.

With great social benevolence, it also plans to encourage the inclusion and participation of citizens in the management of the water service, not for what concerns the policies on the territory, but only for the purposes of the Water Smart Societies and therefore to obtain a "compatible" and "profitable" social pacification.

In Italy there is an example that goes exactly in this direction: the so-called Colao Plan for the rebirth of Italy. At the points 33 and 34, this Plan proposes a revision/simplification of the legislation on public works and on the environmental impact assessment for all infrastructure investments that concern the field of water; it also proposes a review of the tariff system in order to increase the appeal of private investments in the water sector (which basically means an increase in tariffs); it proposes as well a review of the sector governance system to stimulate large business combinations and public-private partnerships, also extended to the multiutility and energy sector. An overall set of proposals that want to define the process of privatization and financialization of the water sector.

AFTER 9 YEARS THAT FEEL LIKE 9 CENTURIES, after a betrayed referendum, after the reduction of the Municipalities to simple paper pushers for private managers, today water is in the middle of an attack that not only definitively conceives water as an asset of profit, but that also makes it the core of a great investment that is out of public control, completely in the hands of large companies in the multiutility sector that will directly manage the resource, will control it along the whole service, from the sources to the supply, from purification to environmental impact, also taking on the role of environmental inspectors, production inspectors and requirements inspectors.

The ideology of economic compatibility that reigns over the political system has destroyed social rights and the supremacy of profit has stolen from environmental resources.

AFTER 9 YEARS THAT FEEL LIKE 9 CENTURIES water must remain more than ever the symbol of the battle for the defense of natural resources and for the right to life, against its reduction to a commodity. Water must be the field on which to build resistance and free and democratic demand for primary rights, from health to education, from income to services, as well as civil rights, just like the struggles in many parts of the world are already showing, from Chile to Sudan, from the USA to Hong Kong, to France. 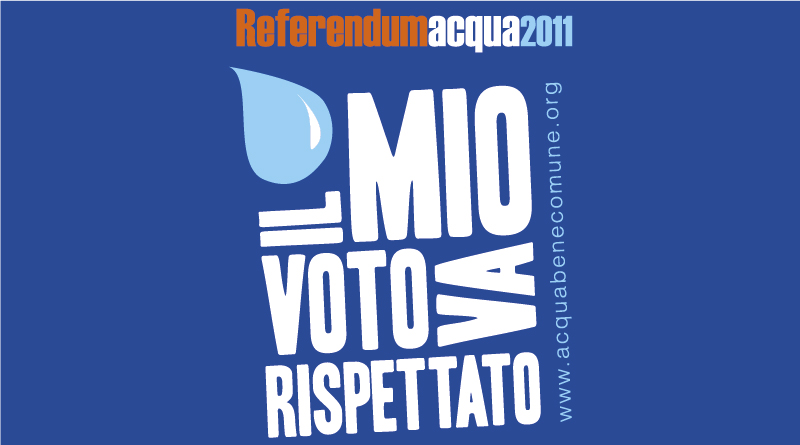