Access to safe water and sanitation has long been internationally recognised as a basic human right, essential for life. But when water becomes a marketable commodity rather than a public good, it is inevitable that human rights are undermined.

In September 2018, the United Nations released a groundbreaking report highlighting the detrimental effects of privatisation on human rights and the poorest in society. Philip Alston, the UN Special Rapporteur on extreme poverty and human rights criticised the World Bank, the International Monetary Fund, and the UN for aggressively promoting the widespread privatisation of basic services, and governments for undermining human rights.

Read more on the website of End Water Powerty

The Bern Convention decided to open a case-file and called on the Albanian government to halt the hydropower plant projects on the Vjosa River. Instead, the government should prepare appropriate strategic environmental impact assessments and additional studies to evaluate the environmental impacts of the projected hydropower plants. The Vjosa is one of the very last unspoilt rivers of Europe. As part of the campaign “Save the Blue Heart of Europe”, environmental NGOs EuroNatur (Germany), Riverwatch (Austria) and EcoAlbania fight to protect the Vjosa.

The Bern Convention is among the most important nature conservation agreements in Europe. Accordingly, the decision is a moment of joy for EcoAlbania, who had filed the complaint. “The Vjosa river network is really unique and of pan-European value. Now we and the representatives of the Bern Convention have to keep a very close eye on what steps the Albanian government will take to implement the twelve recommendations adopted by the Standing Committee”, says EcoAlbania CEO Olsi Nika.

The European Court of Justice on Wednesday ordered Spain to pay a €12 million fine for prolonged failure to comply with a European directive on urban waste water collection and treatment.

In an earlier judgment issued in 2011, this court had found that there were still 43 agglomerations with a population of 15,000 or more that failed to meet EU standards, even though member states were supposed to have adequate collection and treatment systems in place since 2001.

Spain was given a 2013 deadline to comply, but the deadline expired and 17 localities were still discharging their waste water without proper treatment.

In 2017, the EU Commission brought new action, and the Court of Justice has now fined Spain a lump sum of €12 million, plus a penalty payment of €11 million for every six-month period of delay in getting the remaining municipalities up to speed on their water treatment standards.

As of today, there are nine Spanish municipalities that still fail to meet EU urban waste water regulations: seven in Andalusia (Matalascañas, Alhaurín el Grande, Isla Cristina, Tarifa, Coín, Nerja and Barbate), one in Asturias (Gijón Este) and one in the Canary Islands (Valle de Güímar).

London, Prague, Radolfzell, Vienna  – Representatives from the Save the Blue Heart of Europe campaign to save Europe’s last remaining wild rivers handed in a petition endorsed globally by more than 120,000 people, calling on international development banks to rein in financial support for hydropower projects in the Balkans. 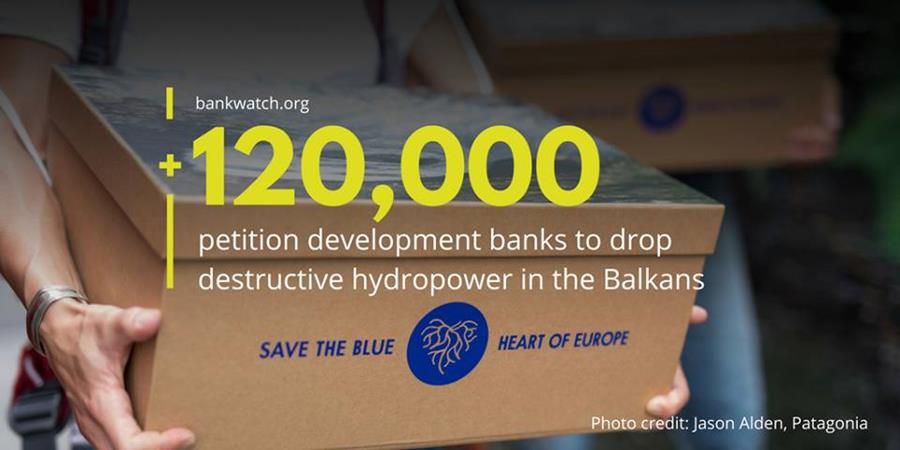 Delivered to the London headquarters of the European Bank for Reconstruction and Development, the petition targets the funding of the EBRD, the World Bank and the EU’s European Investment Bank, which together have funded at least 82 hydropower plants across the Balkans – of which 37 are located in protected areas – with EUR 727 million in total investments.

A wide range of (Spanish) civil society organizations and entities agree that we are facing a really decisive moment to recover and maintain the good state of conservation of our aquatic ecosystems, not only to comply with the Water Framework Directive and other commitments. Europeans in this area, but to adapt to the reality imposed by climate change, reduce our vulnerability to the growing risks of drought and floods and ensure sustainable use of water, with demands adapted to the resources actually available. On the other hand, we face privatization pressures, both in terms of the commodification of water rights and the privatization of water and sanitation services and even irrigation management.

The unsustainable growth of water demands, both in irrigation and urban-industrial uses, is currently one of the main problems to achieve a sustainable use of water and the good ecological status of our ecosystems.

As part of the Global Sur and Hasankeyf Action Day in almost 30 cities actions have been organized on April 28, 2018. Activists and civil organization raised awareness on the ongoing destruction of the two antique cities Sur and Hasankeyf at the Tigris River in North (Turkish) Kurdistan. In the last years Sur and Hasankeyf have become synonyms for the repressive and exploitative policy of the Turkish government against nature, culture und people.

The 12.000 years old town Hasankeyf and the surrounding Tigris Valley are threatened by the Mega-Dam Ilisu Dam in construction which is one of the most controversial dam projects in the world nowadays. It would destroy the livelihoods of up to 80.000 people in North Kurdistan and probably much more in Syria and particularly in Iraq.

Sur is the old town of Diyarbakir which has been attacked brutally by the Turkish government with military after the war in Kurdistan has restarted in summer 2015. Although part of the UNESCO World Heritage Site of Diyarbakir the state destroyed systematically half of Sur, 23.000 people have been displaced and a culture of thousands of years eliminated.